Get the Financial Aid Guide

Discover different ways to pay for college and learn more about the FAFSA process.

Discover different ways to pay for college and learn more about the FAFSA process.

Discover the flexibility and quality of USF Health’s online programs. Learn more about our degree and certificate programs, tuition and the advantages of online learning.

Discover the flexibility and quality of USF Health’s online programs. Learn more about our degree and certificate programs, tuition and the advantages of online learning.

The technology known as blockchain is poised to make its mark on the healthcare industry, potentially transforming the way health data is stored, secured and accessed.

According to advisory-consulting organization Deloitte, 35% of health and life sciences companies plan to start using blockchain by 2018, so the technology obviously has many in the healthcare industry excited.

So, what is blockchain and why are some in the healthcare industry so enthusiastic about it?

Blockchain is a digital ledger, sort of like a spreadsheet. It records transactions, with each transaction assigned its own block that becomes part of a chain. The record of the transaction is distributed to all computers on a network, rather than being stored centrally. 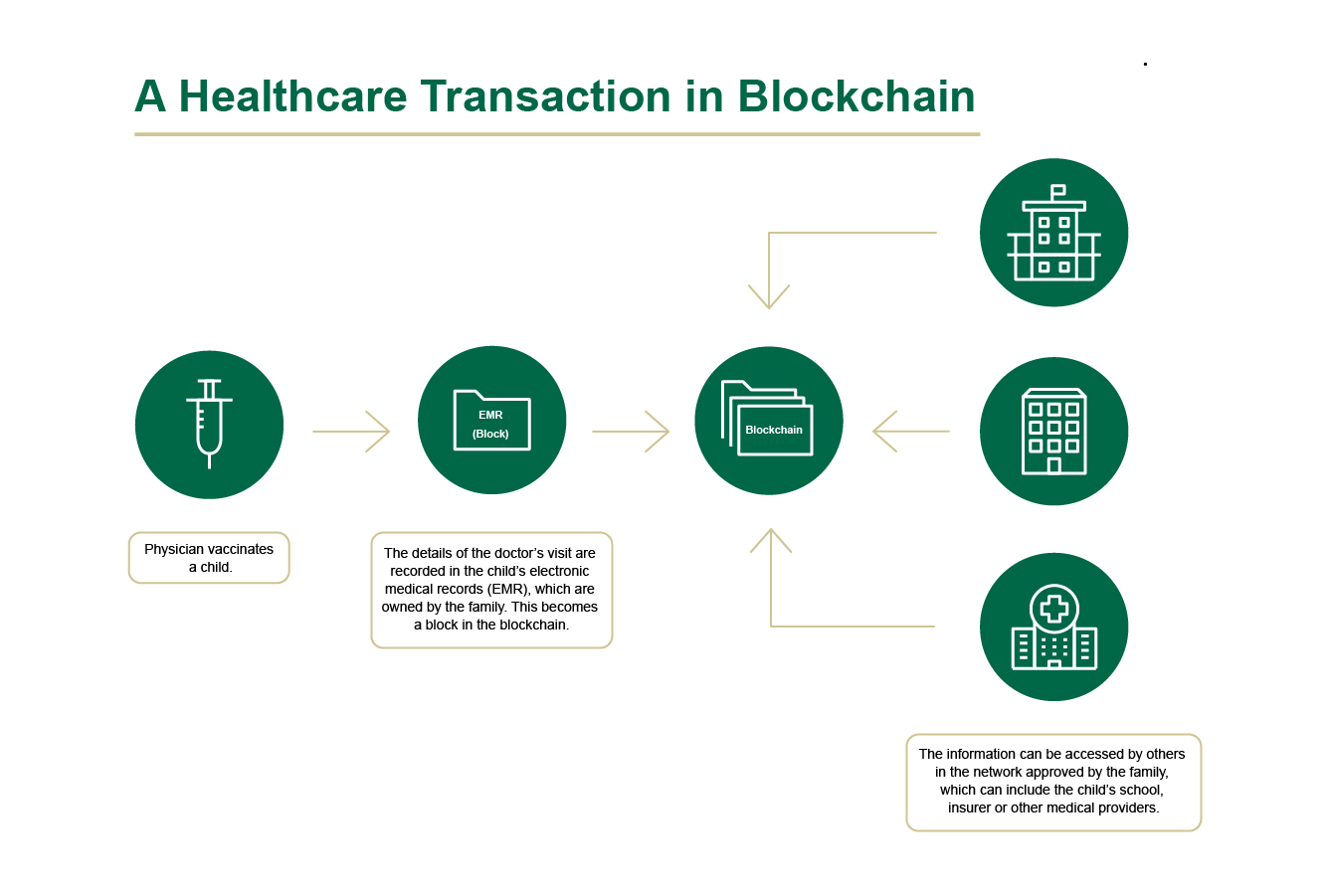 This decentralized approach makes the records more secure, all but impossible to alter and less susceptible to theft. The benefit to doctors is that records are easily accessible, but hard to manipulate. The advantage for customers is greater confidence in the protection of their medical records.

Blockchain originally was designed to support the virtual currency Bitcoin, and is designed to prevent misuse and to establish trust and identity.

Easy access: All the information on a blockchain is visible to every member of the network, meaning patients, primary care physicians, specialists, the insurance company and others involved in a patient’s care have access to the same information simultaneously.

Hard to hack: Because the data is not stored centrally but, instead, across a network of computers, blockchain is unattractive to cyber criminals. An attempt at holding data for ransom, for example, would be useless, since each member of the network already has a copy. Even if a member of the network went rogue, the information on blockchain can be added to but not altered.

Sharing made simple: Since each transaction creates a new block in the chain, finding out what happened when — for example, was an insurance claim paid, and if so, when? — can be discovered without a series of frustrating phone calls, emails and snail mails.

Some Have Their Doubts

For all the plusses, blockchain still has its share of skeptics.

“We’re definitely at the height of the hype curve,” Prashant Natarajan, director of healthcare solutions for Silicon Valley firm Oracle, told Healthcare IT News. “I think there’s going to be about two or three years of disappointment setting in once people figure out it’s not the greatest thing since sliced bread. And then they’re going to have to figure out how to build a skilled staff, how to change the mindset and change the existing systems to be able to accept this.”

HIPAA Compliance is a Concern

The concerns around blockchain’s use in healthcare involve HIPAA compliance and interoperability.

Healthcare organizations are going to have to integrate HIPAA policies into the new technology, which will mean converting 1996 regulations into 21st-century technology.

It won’t be an easy fit, according to Sharon Klein, a partner in law firm Pepper Hamilton’s health sciences department and chair of its privacy, security and data protection practice.

“All kinds of data can be stored with blockchain,” Klein told Healthcare IT News. “But from a privacy perspective, it matters whether the data that is stored can be considered protected health information and therefore regulated.”

Blockchain’s “structure is so inflexible, and very different from any industry’s structure when it comes to exchange of data,” Klein said. “That’s the hurdle we have to get through.”

“Without solving the interoperability issue, I don’t think we’re going to get any of this implemented,” said Joe Guagliardo, chair of Pepper Hamilton’s Blockchain Technology Group, in a Healthcare IT News article.

“What money can it save, what money can it generate, what can it do for the patient?” Natarajan asked in Healthcare IT News. “If it doesn’t answer those questions, frankly, I think the broad use case doesn’t matter.”

YES! Please send me a FREE brochure with course info, pricing and more!

Informatics is Driving Innovation in Radiology

The Most Important Health IT Trends to Watch in 2020